Confidence abounds when it comes to the talk of the recent economic development in Indonesia which entails a boom in foreign investment, property market, and infrastructure. These three are on the spotlight especially in the capital Jakarta.

The newly imposed regulation to limit the number of franchise outlets of a single ownership to 150 suggests how the municipality hastily keeps up with the surge of private investment into the country. Owner of a franchise whose outlets has exceeded the number set in the regulation but nevertheless plan to open more stores must form a partnership with another local company, who will in turn buy 60% of shares in the particular store.

Reports on property are dominated by surging price at a fast rate, and undersupply of office space. With 95% rate of occupancy, it is predicted that rents will jump as demand for office space shows ever increasing trend. Lacking anticipation, it is not until 2014 that supply will slightly catch up with the demand.

But the sector that is most lacking is road construction, which also entails transportation. For the latter, the absence of a sound mass rapid transit until, perhaps, five or six years to come, shows just how long the governments have dropped the ball, and the consequence it brings now.

For the former, rapid construction is commonplace across the city. The plans to replace heavy intersections and railroad that crisscross the city’s road network with flyovers and underpasses have drawn mix reactions, from proponents who applaud the visible plan to opponents who insist that the real solution to traffic problem is to bring extensive line of MRT to the city.

One of the most striking sights of Jakarta in the making is found in Karet district, where a flyover that has stood to reduce traffic congestion since more than two decades ago in the intersection of Satrio Road and the most important road that passes the city’s most vibrant central business district, Sudirman Road, will now see gigantic structures that stand higher than it, built to ensure the traffic flow from west to central part and vice versa.

These massive structures will support the future elevated road called non-toll highway. This new road section lays directly on top of another existing road below and goes on the same direction.

It has become more vivid for Jakartans to envisage two layers of road that directly go in-line for approximately seven kilometers long, especially for those whose companies are located in the office towers, flanking the roads.

According to Jabodetabek Urban Transportation Policy Integration (JUTPI) – a result of cooperation between JICA (Japan International Cooperation Agency) and the governments – daily commuters to Jakarta accounted for 1.1 million people in 2010.

Blueprint of toll roads (expressways) and non-toll ones include in-detail drawings, such as designated locations, complete list of intersections, etc. However, there are less mentioned plans to procure new transjakarta buses, trains, or the much awaited MRT project execution than it otherwise should.

Sure, the related agency who made RDTR breaks the public transportation design planning down into three main objectives: to start building MRTs, transjakarta buses procurement and opening new corridors, last is the attempt to revive monorail project, although the last two suit better the term “public” rather than “mass” transportation due to low passanger capacity.

Moreover, RDTR describes about Lebak Bulus-Kampung Bandan MRT line design. But it is deemed far from ideal as a single line will fail to deliver a sound and functioning citywide transportation.

Anthony Ladjar, co-founder of Jakarta Sidewalk Community regretted the governments inability, or ignorace, to provide such basic facility. Solutions presented in RDTR is somewhat dominated by the further addition of roads, expressways, and flyovers.

The newly elected Jakarta Governor Joko Widodo said he is 100% for transportation for the masses. But whether he could pull his weight into accomplishing this tremendous task remained to be seen in the first few months in the office.

After all, Jokowi now leads an administration who held accountable for the past unresolved problems. He has to come to terms with the lawmakers who attain the capability to make or break a deal in this city (if not the whole country).

Road for cars or public transport?

Building a better Jakarta is the reason he takes the helm. It is a bit discouraging (as is often the case) to expect to see Jokowi’s trust index drops because of the lackluster growth. Again, this is the capital of the democratic Indonesia. We chose to do it the hard way from the start.

While still living up to his promise, Jokowi made an insinuation about how he had slightly changed the course in just a week after he made a tough stand regarding his disagreement with the six expressway proposals.

“Providing a facility for cars would encourage more ownership. It runs counter to relieving the traffic. I asked them (the Public Works Ministry) whether the planned expressway will dedicate a lane to serve elevated bus route. I have not heard news from them. But I welcome it,” he told the press. 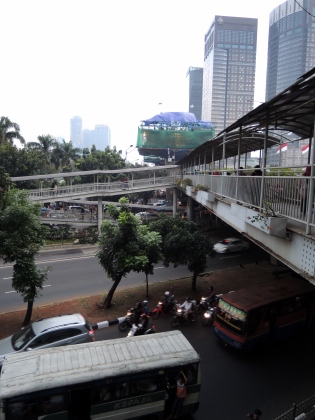