The article first appeared in the Jakarta Post, 2 October 2013.

Amid the haze caused by poor air circulation, a man who seemed prepared for what was coming one Sunday in September unsuspectingly looked on as smoke and ash filled the air, rendering several exhaustion fans ineffective.

His hair remained unaffected. He was not bothered that the smell would linger on his clothes for the rest of the day. And most astonishingly, at a time when many could not deal with the pain of their eyes being exposed to the smoke for so long, he never once pulled down his reading glasses.

Chi Xing Xiang is an important person in the Chinese community in Jakarta for his deep knowledge of the Mid-Autumn Festival.

He kept a piece of paper in his hand as he mingled with old citizens, the signature style from the event organizers of old times. The majority of people his age knew little of the intricacies that formed an ancient tradition and had barely changed in modern times.

He led the ceremony using key points on the small piece of paper, as his memories regarding this part of culture had slowly faded. “This is the identity of our people, but time washes away everything, including my best will to preserve this,” he said.

He thought it was hard to approach the lost generation. In his sorrow, he said this festival was a major tourist attraction in neighboring countries, “but here, for so long we have been doing it behind closed doors.”

And so he concluded that many generations who were born in the repression and forced assimilation era had lost the chance to preserve the identity of their origins. 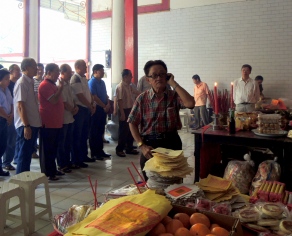 As evidence, people crowding into ancestral homes like this one in Kota Tua, the old city of Jakarta, were part of an aging population, in their 50s and above.

Whereas the Mid-Autumn Festival is held annually to celebrate the harvest season, with some even drawing a comparison to the US Thanksgiving Day, the scene in Jakarta was rather solemn. There was no jubilation in the streets like at Chinese New Year. There were no dragon parades or lion dances.

The people marked the festival with prayers for their ancestors, showing gratefulness for what they owed to the dead: protection, prosperity, health and blessings. They prepared symbolical offerings across tables and placed them there for an hour or so until the living were sure that the dead had been served well.

Bowls of rice, the epitome of Asia’s ancient prosperity, were placed closest to ling pai, the engraved wooden placard representing past generations. Food of all sorts occupied the following rows. Organizing this was not a complicated task, since many volunteered their time before the ritual started.

To convince himself that everything was in the right order, Xiang had to run inspection several times. For the sake of the tradition he had held since time could remember, Xiang left a narrow margin of error in the ritual.

His instruction led many to bow to the placard, a medium believed to contain the spirits of the dead. It is as if they had given a mandate to him to be the master of ceremonies.

But would there be any regeneration? “I can only serve as long as I can,” he said after the ritual. Everybody left and headed to a restaurant in Batu Ceper, Central Jakarta, where merriment in the togetherness of that day awaited.