Musi River is indispensable to the history of civilisation in the region, and for hundreds of years developing into what is now called Palembang, the capital of South Sumatra province. It is vital in building trades with Asian traders and voyagers coming from as far as Middle East.

This is the centuries-old economic backbone that give the city shipping access to otherwise a landlocked region. Palembang is surrounded by land, and the closest shores lays miles away east. Ampera Bridge and Kuto Besak Fort were two historic gems of the city located around the river. 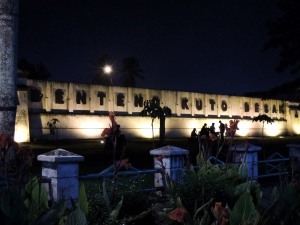 While Kuto Besak Fort was initiated by the ruling Sultanese in the 18th century, thus removing the palace from the deep woods into the river bank, Ampera Bridge was a national triumph in the early years of independence, politically speaking.

It was a realisation of over 50-year ambition, started by Dutch administration’s idea in 1900s to connect the thriving economic hub split by a river.

The idea was never materialised until the Soekarno, the first president of Indonesia, brought the plan back to the table and gave full throttle at the time when the republic was still at its infancy and reserves in short supply.

He secured financing by using up large portion of war compensation from Japan, as well as importing their technical knowledge and engineers. That is why building Ampera Bridge is more of a political triumph rather than a technical one, in domestic point of view.

Most of its time, the bridge only sat there as a reminder of a once overarching vision by the late leader of the nation who arguably had inaugurated more landmarks than his any other successors to this date.

Over three decades ago, the officials decided to stop utilising the center part of Ampera bridge as a retractable section to make Musi River passable for various size of boats, even heavy barges and ships.

Even in the 90s the lifting mechanism had been removed, and so permanently disabling its unique feature.

After many years in silence, some local supervisors who took part in the project confessed that there was an oversight in construction that only years after had everybody seen the impending consequence.

Dilapidated shophouses found in many parts of the city bear historical account to the creation of foreign settlements, subsequently the formation of trade routes and economic activities that led to the city’s steady growth in the Dutch colonisation period toward the twentieth century.

Nevertheless, the citizen of Palembang once again witness the revival of spirit in modernity that the makers of the bridge used to envision half a century ago.

A foreign giant lighting company had undertaken a project to embellish the look of the bridge with a stunning show of light.

Street lamps drape the surrounding area into a glittering night experience, and the reflection from the water surface helped create a vigorous night scene at the heart of Palembang.

Palembang enjoyed the status as one of the highlighted western regions in the initiial phase of 5-year national development. Presence of wide roads indicated infrastructure modernisation. It is a pity that sentralistic approach further dominated the country’s modern history.

The city administration now has recreated a new image to showcase its ambition, manifested in the Jakabaring sports complex playing the 26th SEA Games in 2011.

Capable of holding over 20 sports, now it attempts to host another international-level sporting events, the third Islamic Solidarity Games, due open 22 September 2013.

No less than 40 nations have confirmed participation in the event that will cost the host city an estimated USD13.2 million.