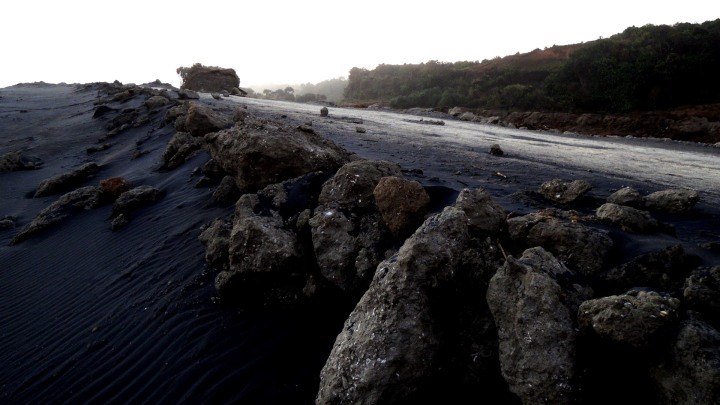 Somewhere in the coastal line of West Java facing Indian Ocean lays a road built by a private corporation, and was used to serve mining activities many years ago. The place, holding abundant reserves of iron ore, was fought by many since 1980s, and had seen multiple times of changes in ownership as well as exploration permit. This stretch of road marked the once hectic exploitation out of massive investment.

Since the withdrawal of the companies for various reasons, there are many parts of the abandoned road that have been covered by thick layer of sand, carried by the gust of sea wind. Meanwhile, the occasional tide level displaced stone remains that were once used as one of the materials for road construction.

Apart from the local inhabitants, there seemed to be no one who finds the six-kilometer road useful. There are traces of cattle or motorcycle tires, all belong to the coastal villagers who remain isolated as this road had never served the purpose of connecting remote places to small towns.

Nevertheless, travel is made easy, although nobody consider the route to be vital as many still preferred the narrow, winding and muddy paths across the mountains they have been so accustomed to for a long time. Several dilapidated structures by the road are not houses as assumed, but simply resting places for peasants, or for those who seek refuge from scorching sun, mainly during dry season.