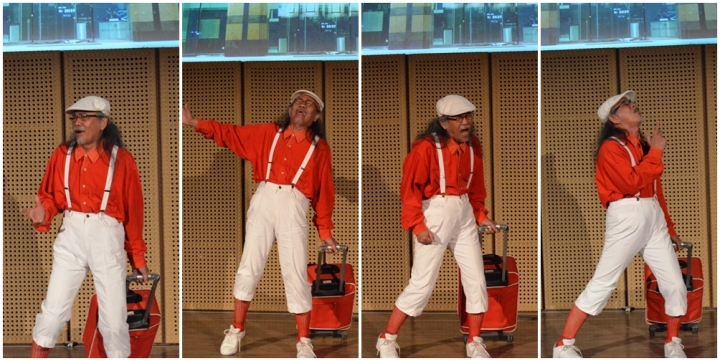 What troubles Jose Rizal Manua’s mind of late other than keeping that brain brushed up to memorize a hell of a line in theater when he is no longer physically young, despite his conviction that he still is, at least in soul?

He has come up with a good thinking to retake the lights and attention, keeping up with the local trend that apparently centers around the stand up comedy shows with sexually suggestive jests or unscrupulous foul mouths.

It is the difficulty finding sponsors for his plays. He was not as eloquent as his spoken lines as Mas Joko, playing Monolog Mas Joko when asked why is funding so hard to get. “I don’t know,” exasperated by his own perplexity.

Jose, whose theatre group won the the 2006 World’s Festival of Children’s Theater in Lingen, Germany, is a seasoned actor that always finds a relevance in his project to respond to people’s likeliness in performing arts, or lack thereof.

Having set up Remy Silado’s literary work circa 80s in an urban dwelling where he played the 50 year-old man who fell in love with a young, career-promising woman who lives alone up on the 19th floor apartment, Jose, in his sublime articulation, talks about coming to terms with gender equality, and of course, the equal rights for an infatuation with a woman aged far apart, oblivious to how the society ridicules him with his outfit and a suitcase filled with roses.

But in his fine act, he persists in not to let theater fades into oblivion. And it calls for us to not to ridicule our own cultural identity in respect of art, implied Jose right in the beginning part of his monologue.