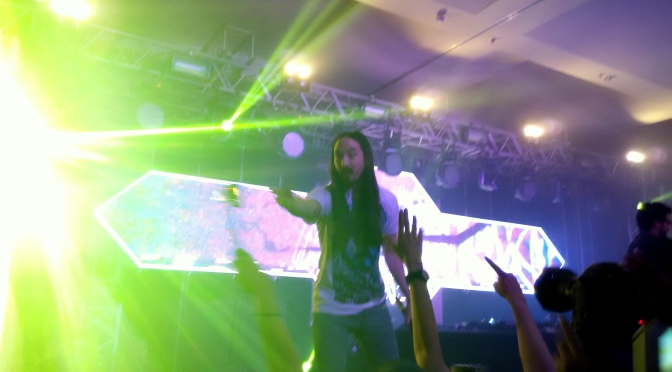 Begin playing underground music in a student apartment some ten years ago, the American DJ Steve Aoki has enjoyed international stardom since three years ago, following his debut solo album in 2012.

Now his show ticket fetches at least USD50, the price his fans paid in his latest visit to Jakarta early this year. He has come more frequently to the faraway country like Indonesia, implying that the globalization has had a direct impact to someone’s fame from the other end of the world.

In particular, an electro house music DJ who has won grammy award such as him, was met with ecstatic audience, even though in a smaller crowd compared to the giant scale concerts in Japan, Brazil, or the latest one in hometown Miami.

After many years of relentless hard work, Steve undoubtedly set the standard in DJ profession to a new level.

Besides from the massive crowd in global concerts, it is the consistency in preserving the stage uniqueness that actually sets him apart from countless others whose instant presence (and equally instant dissapearance) are commonplace in the modern music era.

The physical injury following trampoline fail in Puerto Rico, for instance, did not deter him from doing another risky stunt in Jakarta, when he jumped off two storeys high to the raft on top of the crowd.

The damage in his vocal cord due to years of on-stage screaming did not pull him out of today’s scheduled Colourfest 2015 in Glasgow.

And at the core issue, the criticism he faces regarding the negative opinions towards house music and the questionable skill of the USB-sticking DJs never make him falter. He loves the crowd’s enthusiasm. He knows all too well the value that made them so.

Just as Paypal co-founder Peter Thiel pointed out, there will be no Bill Gates and Microsoft, or Sergey Brin-Larry Page and Google, other than the cunning imitators.

That said, there will be no other Steve Aoki in the future. Since the effort to become a wannabe is futile, new aspiring profiles in the same industry, especially local talents, should focus on innovation.