Sand and gravel mining flourish around the small town of Rangkasbitung, the municipality of the enormously 3000 hectares Lebak regency, Banten. It is an old town dating back to the Dutch colonial era, developed to provide industrial supplies to Jakarta. Oil factory and gold processing plant had thrived during the industrialization period that began to take effect in Indonesia in the 1930s. The region has since supported the growth of the capital with numerous materials. Gravel is one of them.

The dramatic environmental impact seen a few kilometers north of this historic town bears testament to the crucial role this region has ever done to provide materials for the endless construction activities in Jakarta. Entering the capital’s outer ring road at night with a tarpauline-covered back, massive number of trucks carry sand and gravel mined from this region. Many parts of the road around Rangkasbitung are damaged as large trucks travel to Jakarta and back on a constant routine.

Sand mining area opened sporadically, and contained material volume lasting for several years of mining activity. Few have size and quantity that sustained a decade of exploitation. In one of the biggest areas left several years ago, large pit have become a pond that unnoticingly goes down to 20 meters deep, a villager said.

The open area located right in the populated village sustains heavy damage due to frantic and irresponsible mining. The excavation has created a long, dead crater, in contrast with the lush, green chunk of untouched land above it.

Similar to the high activity just half a kilometer away, this area used to be a bustling mining area. But there is no evidence of rehabilitation taken place.

There are at least two mining areas in the village. The road access to the village are beyond repair. The inhabitants are seemingly ignorant, even to such an extent that some saw an opportunity to offer misleading information that the abandoned area has substantial remaining volume beneath, often to gullible businessmen.

In another village, a smaller size of sand quarry are left abandoned not so long ago. Heavy duty equipments remain in place for an unknown reason. An aged woman, seen walking around the empty facility and inundated pits refused to talk about the condition, or even her name. Working as a peasant, she lives in a shack near the pit.

Given the degree of sensitivity, she only gave a hint surprisingly through her question, “Where is he?” It is assumed that she is a local villager waiting desperately to meet the long absent site manager to demand a promise yet to be delivered. This quarry is also located near the population of a village whose access were made difficult as a consequence of what used to be a rampant mining in the vicinity. Her face evoked that of dissilusionment and helplessness.

Social and environmental problems are unspoken, but not unheard of. Lebak authority issued a ban on sand and gravel mining in 2016 in response to environmental damage by the hills of Cimarga district, reportedly to causing flood and water crisis in the region.

Protests of the road condition also contributed to the mining restriction. But afterwards, there were reports that several activities resume, supported by the local group of proponents to the industry that has brought them a promising income.

Reports of similar outrage has over the years occured in many parts of the country, from Riau, East Java, Central Sulawesi, and Bali, highlighting various complaints such as landslides, floodings, and health problems.

The complexity of the controversial issue has gone to the extent that while the government must deal with legal investors to make a just decision for the best interest of the country, they fight many more conspicuous, illegal sand miners operating throughout the country, such as the latest case in Mojokerto, East Java, seizing two excavators and seven heavy duty trucks.

Panorama of a deserted sand quarry 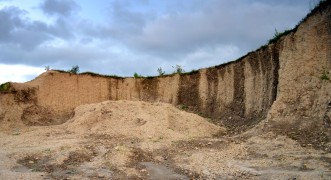 A crater at a deserted sand quarry