It took a year for Adra Karim and John Navid to prepare a collaborative work in a duo called Mirak Div. They recalled Tony Prabowo, a music composer with contemporary taste, whose initiative led to the group formation, and later they accepted the invitation to play in his annual event, and eventually staged their maiden performance in Jazz Buzz Salihara 2018.

It was meant to be a recording project, as John described it. But when the plan slacked off, the duo realized they had to take whatever the chance coming at them.

Having trained for the past three months, they did not rely that much on anyone else to do the preparation. John’s sound experiment, for instance, was developed through self-observation of his surrounding, while Karim said that, unlike other mainstream jazz events, here they were more involved in setting the stage and doing the sound check.

The performers are more concentrated to their respective works performed in the much segmented event such as Jazz Buzz Salihara.

John, an IKJ graduate in percussion, and the drummer of the pop-retro band the White Shoes and the Couple’s Company, said the most interesting part of playing in this event was the hunt for items to be made rhythm instruments and to be used to exploring new dimension.

Karim, on the other hand, told that collaboration led to unexpected findings such as in Mirak Div. Having applauded John as a knowledgeable musician with his background and experience, Karim is definitely not new in the world of experimentation. He is a member of contemporary jazz band Tomorrow Ensemble People.

After all. their aim is only to prove that they could compose an alternative music experience to audience of Jazz Buzz Salihara 2018.

Although John admitted that there are less listeners in the country for this kind of experimental music compared to pop or electronic, but it is in the lesser number where he sees the opportunity.

When asked about the challenge and opportunity, Karim, who obtained master’s degree in Prince Claus Conservatorium, Netherlands, has less worry about the level of reception among the Indonesian audience, as he is convinced there are a lot more who can appreciate the different style in music.

But he attributed the challenge to the key players of the local music industry whom he perceive as a little too hostile to experimental music like what they have worked on.

“I am more concerned with those people up there who keep on making notion that the listeners are not ready for this kind of music, or that a certain style fits only to a certain audience, and so on,” he added.

On stage, Karim and John seemed to have played for their own, whereas actually they both play a collaborative, complex composition. Karim’s synthesizer created the deep ambience, amplified with the dim stage, a proof of a good lighting work. As he improvised and switched between his keyboard, organ, and grand piano, John scratched his drum, and later on created a diminishing effect of echo by using his drum stick.

Their composition create a sense of solitude, but also raucous with the use of unlikely sound inducing items, such as duct tape, kerecekan tukang patri (street smith worker’s tool), toys, ping-pong balls. Even he was seen pedaling bicycle to bring out the sound of chain gear.

Just when they showed a piano drum interaction in a more rhythmic sense, suddenly they continued with another eerily sound experiment, and progressed to traditional Indian arrangements and rhythm, perhaps influenced by John’s long period of practicing tabla in Indian Cultural Center. It is all a well-planned experimental performance. 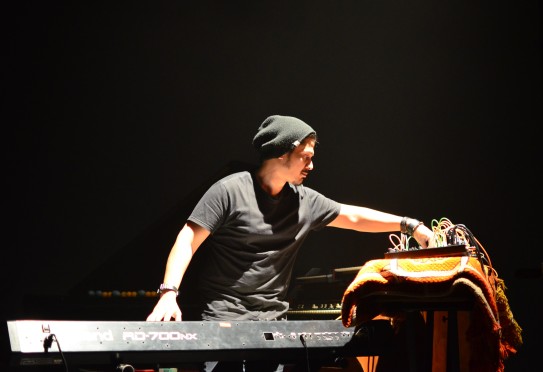