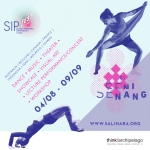 SIPFest 2018 is a performing arts bienalle held by Komunitas Salihara in conjunction with the art center’s tenth anniversary. think archipelago is a proud media partner of the event which runs from 4 August 2018 onwards until early September. To see more of their programs, please click all the SIPFest 2018 banner found in think archipelago website.

Creating an exhibition in the awe-inspiring vicinity of Komunitas Salihara was both suitable and challenging to Jakarta-based sculptor Gabriel Aries Setiadi, whose artworks involving LEDs are among the three visual artists brandishing their new media art installation.

Together with Achmad Krisgatha and ARTJOG 2018 winner of Young Artist Award Meliantha Muliawan, they took part in three months preparation, from concluding survey to locate the spot for their artworks, to creating process by adapting to the architecture of Salihara, and the final step of installation which had taken them by surprise.

The result of the contemplation was what the artists aimed to share with the audience of Salihara International Performing Arts Festival 2018. “Artists should aim at facilitating the public through ideas,” Gabriel said before his arched light art gracing a silent corner of the second floor. More striking spot is Achmad’s giant blue LED installation hanging  cold and lonely at the apex, increasingly pervasive as the dusk fell upon visitors staring from the viewing deck of the third floor.

Curator Asikin Hasan who prides the art center he works in as the country’s best among other buildings of similar function by Ikatan Arsitek Indonesia, said that in its tenth year, Komunitas Salihara has progressed from a mere place of exhibit into a public space, and currently being a place to form discussion.

Themed Di seni senang, (Happy go artsy), the art space’s co-founder Nirwan Dewanto said SIPFest continues to be a small recreational party for the exceptionals. “The majority of our audience aged between 20-30 years old who fill the 220 seats at its most capacity with a different kind of art expectation. I think that entails critical discourse we have been nurturing here,” he said.

He added, “We do not simply invite Didik to have him dance here, but we want to raise the transgender issue often entailed in his dances.”

In a similar notion is choreographer Otniel Tasman chosen to perform Lengger, a dance only recently brought to light after being shunned for long in the place of its origin in Banyumas.

“I put honesty above everything else in my work, about how our culture perceive Lengger all this time, the discrimination those minority men face for dancing like women,” he said.

A theater by Rukman Rosadi, the Yogyakarta-based proficient director who gets less scrutiny, about Sjahrir, played by Rendra Bagus Pamungkas (starred in Wage as Wage Rudolf Supratman, 2017) talks in parralel about the universal value of being human.

Universal humanism, a non-violence and non-discriminatory movement since 1969 by its founder Mario Rodriguez Cobos, has always found a relevance in many of Salihara’s program, a necessary identity reminder especially at the onset of of religious extremism.

Among a plethora of programs, from visual art, theater, dance, music, to their latest addition, the art lecture, the SIPFest 2018 feature promising local and international artists alike to share the platform in Komunitas Salihara for a month ahead with names such as choreographer Lucy Guerin (Australia) whose Split won her the Helpmann Award in 2017, musical duo Quatuor Bozzini (Canada), Ju Percussion Group (Taiwan), Toccato Studio (Malaysia), Nassim Soleimanpour (Iran) , whose script read by Reza Rahadian an Sita Nursanti, master choreographer Jim Adhi Limas, dubbed the founder of Indonesian contemporary theater, and many more.