Ever since it underwent major interior makeover a couple of years ago, the restaurant, which is housed in a conserved building in Menteng – the Dutch remainings of urban housing complex with ecological concept arguably the maiden project of its time in Asia – quickly became one of the most celebrated culinary experience in town. 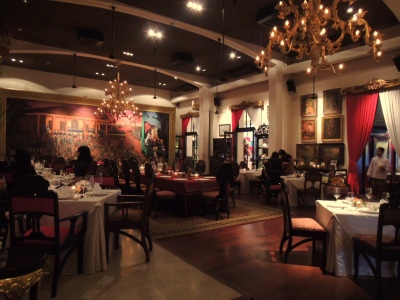 Taking advantage of the characteristics of the vicinity is an apparent for the restaurant owner, the Tugu Group, to boost its existence in the culinary map.

But it is the mixture of elements inside that mainly draws the visitors both and the majority knowledge-thirst audience.

Now serving as an establishment, not only exhibiting souvenirs of colonial times, Kuntskring Paleis interior is decorated with the product of acculturation in early centuries, the epic Mahabarata.

A giant statue of Arjuna in the hall, for instance, forms an inseparable ornament to the wall across the hall.

Hence it entails the presence of Pandawa, consisting of five siblings in Indian mythology: Yudistira, Bima, Arjuna, Nakula and Sadewa.

If there is a time and place of historical value in Jakarta that can spur appetite, Kuntskring Paleis might just be the best in delivering such implosive effect.